permalink
Every year when December rolls around, there's a little something different in the air...something that's always there, but at this time of year it becomes a little more important, a little more in the forefront of our lives. Of course I'm talking about:
Advertisements!
So in that spirit, all December long I'm going to be looking at old classic NES advertisements I found in the back of some old "Conan" comic books. Enjoy!
Terrific News! Arcade Classics To Play At Home 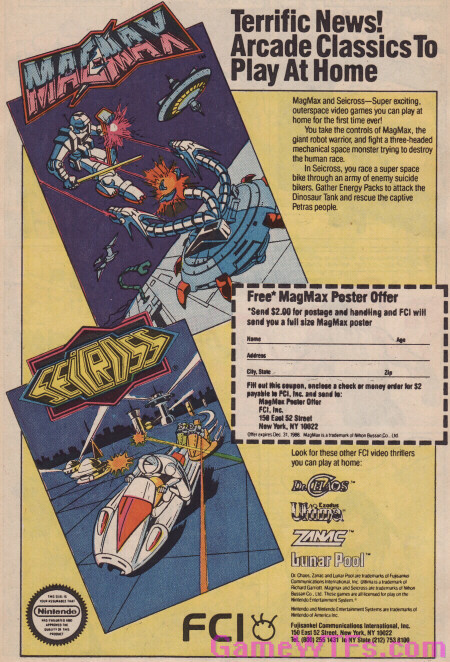 The first thing you might notice -- aside from the dubious choices of capitalizing small words in the title like "To" and "At", and of calling these games "Arcade Classics", and I guess you'd probably notice the swell-sounding offer of a FREE $2 MagMax Poster (jeez, I wonder if that's still valid*) -- well, there's a lot going on.
*: sadly, "Offer expires Dec. 31, 1988"
But what I meant to say was, there's two fun aspects of this ad:
Well then -- let's enjoy each game's ad copy & comic-book-ified cover art! I'll start with the one in the bottom-left corner, because I'm more familiar with it:
Seicross - the hype

Oh -- did you say it was a SUPER space bike? I'M THERE!
Seicross - the ink-n-paint version of the cover art 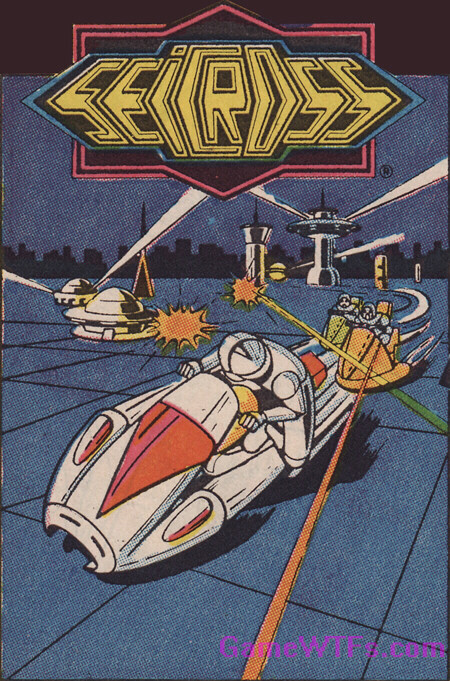 I appear to be riding a Tron lightcycle through a giant pinball machine, whilst being chased by those floor-buffer cars from the Reb Brown movie, Space Mutiny...but with lots of lasers!
Seicross - the reality:

Hmmm, I think I talked about the Energy Packs before...

and come to think of it, I also covered the Dinosaur Tanks as well!
Anything else?
Oh, an army of enemy suicide bikers, you say?

Done and done!
I guess they really hit the game's high points in their ad copy. They get a sore-Nintendo-controller THUMB'S UP for truth in advertising!
Ok, on to the other game:
MagMax - the Hype:

Oooo!
MagMax - the ink-n-paint version of the cover art: 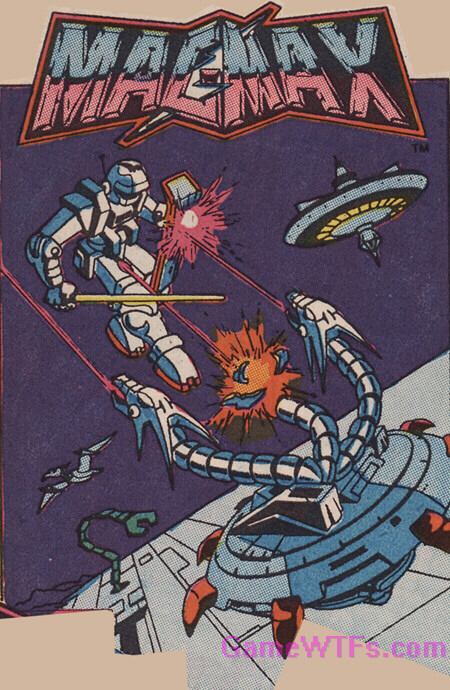 Ahhh!
Wait, is MagMax holding a lightsaber and blowing up the central dragon monster with a groin laser? 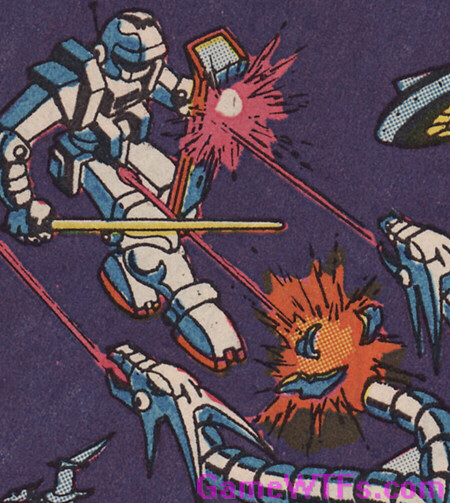 In space, no one can hear you experience a painful burning sensation.
MagMax - the reality:

Well, you start as an itty-bitty spaceship...

But as you proceed, you CAN collect more and more parts of the MagMax robot for more firepower/hitpoints,

And if you're quick/lucky enough, you too may fight the three-headed mechanical dragon space monster using the entire Giant Robot Warrior (complete with groin laser!)

But usually the more pieces you get the bigger a target you are, so they get blown off pretty quickly.

And forget dramatically blowing space dragon heads off (with or without your groin-laser):

When you've shot it enough, there's an explosion,

Then it just goes inert (as indicated by the little twinkle going out of its eyes/pods/base hover-thingie) and you fly right over it. Can you call this moderately-upgradable space shooter game a Giant Robot Warrior vs. Mechanical Space Monster throwdown? I don't think so!
And I hate to kick a game while its down, but you're not even in space. You spend the game either rolling along the surface of a planet, or (after you drive over a featureless gray teleporter pad) flying through caverns under the planet's surface.

So I give MagMax a big Groin-Laser Down, for misleading advertising!
Well, that was kind of anticlimactic.
But tune in next week for more letdowns brought to you by GameWTFs.com's December 2014 Advertainment Month!
— carlmarksguy, 2014-12-05
Tags: Cover Art Theatre
,  Cover Art...yeah.,   Fun with Cybernetics,   It's a Holiday!,   Laser-Powered Fist,   Moto-cross/-cycle,   Oh,  Aliens did it.,   Port-a-Porty,   Prehistoria Euphoria,   Shoot-em-U/D/L/R
Theme Months:
Advertainment
NES:
MagMax,  Seicross
0 Comments:
add a comment?
(back to article list)